ISSUE: What do you need to do if there is an estate in one county or state and real property held by the decedent in another county?

In the event a person is administering an estate in one county where the decedent died, but the decedent held property in his/her name in another county, one needs to consider an ancillary proceeding in the county or counties where the real property is located. This is necessary for title to pass to the beneficiaries in the estate.

Clerk of Superior Court enters the order of probate, the title to real estate devised in the will passes (and relates back to the death of the testator NCGS 28A-15-2(b)).  The probated will thereafter constitutes a link in the chain of title.

Pursuant to NCGS 28A-2A-17 (formerly NCGS 31-27), (1) a certified copy of the foreign will and the relevant probate proceeding may be presented to the Clerk of Superior Court in the county where the decedent owned real property. Then (2) the Clerk of Superior Court enters the order of probate, the title to real estate devised in the will passes (and relates back to the death of the testator NCGS 28A-15-2(b)).  The probated will thereafter constitutes a link in the chain of title.

It’s a two step process so that the administrator of the estate not only files the certified copy of the will but gets the Clerk of that county where the real property is located to enter an order of probate.

If the order is not entered then it extends the life where someone could file a caveat concerning that real property. This happened where an out of state will was filed in the county where the real property was located, but no Order of Probate was entered.

Probate (proh-bayt), n. 1. The judicial procedure by which a testamentary document is established to be a valid will; the proving of a will to the satisfaction of the court. 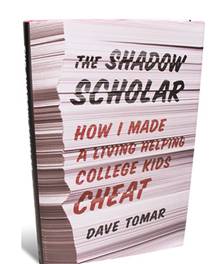 I read a disturbing book review regarding A Man for All Semesters by Dave Tomar. Mr. Tomar writes college & masters papers, even dissertations for students. His income was $66,000 in 2010.

The college and university students hire him to research and write the entire papers. Why should anyone go to college if they’re not going to learn? I thought that was the purpose. This only supports my personal opinion that a large percentage of college students should not even go to college.

But you know what, they basically just want the certificate that says “I’m a college graduate”.

Mr. Tomar is not alone. There are websites such as rushessay.com and college-paper.org that blatantly advertise they will due custom essays for ‘student’ clients. And guess what, some parents support this. Mr. Tomar calls them ‘cockpit parents’ that actually underwrite and support their children’s laziness and ineptitude.

A former Emory University president, William Chace, wrote an essay on the normalization of cheating in academics and stated there is a “suspicion that students are studying less, reading less, and learning less all the time.” The review in the Wall Street Journal states the numbers support this. Economists Philip Babcock & Mindy Marks in 2010 reported that the average full time college student studies 27 hours a week vs. 40 hours in 1961, a drop of one third.

The article continues that most universities are challenged to maintain minimal standards of technical training and assessment. Historically, the goals of universities were to mold student character.

Also alarming, the 2011 book Academically Adrift found on a national sampling that 1/3 of college students demonstrated “no significant progress on tests of critical thinking, complex reasoning and writing” after 4 years of college. Think about this, the less people able to make deeper decisions, the less inventive and effective a work force and nation.

Colleges & universities should be alarmed by this practice.

My personal opinion of the ideal school: one that doesn’t water down it’s student body for the purposes of maintaining enrollment and ever increasing costs of tuition, has no NCAA  Division 1 sports programs (think of University of Chicago terminating its football program in the 1930’s). University of Chicago de-emphasized sports in 1935. It’s now a division III. It is a well respected research institution.

Colleges & Universities: You’re a school not a semi-pro sports program.

I often wonder if parents spent as much money on academic pursuits for their children as they do on children’s sporting ventures, how amazing and additionally gifted would our children be? What if there were more competitions, with monetary rewards, for the best scientific discovery, philosophic thought, writings, artistic performance for our students rather than lucrative professional sports contracts?

It’s all about our goals and our focus.

Am I off base?

Ever wonder why you just can’t seem to save more?

“Save More?” you exclaim “I don’t save, in fact each month I think I get poorer.”

I’ve noticed as a lawyer over the last 15 and some years of practicing that the population as a whole is getting poorer. I know I’m not the only one, it’s been reported in papers. But I’ve seen it practicing law when people can’t afford to litigate a case they should litigate. I saw it back when I did bankruptcy cases also.

I’ve looked at why my family doesn’t save more too.

A big reason, in my opinion, is all the incidental expenses we tack on to our budget.

For instance, twenty years ago we didn’t have:

2)      $150-200 bills for internet & cable/dish/directv. I looked at a flat screen Saturday. The price wasn’t so bad, then I realized I’d have to upgrade from basic cable. I walked away.

3)      Credit Cards: On top of the above, twenty years ago it wasn’t quite as prevalent for people to defer payments on a credit card. A credit card was a charge then pay the bill at the end of the month. Now people run balances at interest rates that make loan sharks salivate. You know if you pay the minimum, you’ll never pay off the credit card balance. Practice Point: keep really low credit limits ($1000 or $2000) & pay the sucker off every month, on time.

Every month, $300-500 goes to just maintaining the 3 expenses I described above. And what do you get at the end of the day? Another bill for next month

Meantime, my goal is to increase retirement funding and brokerage accounts. I’m taking a hard look at what I need.

My question for you: do you really need that smart phone? digital cable? LeBron James Shoes?

Next blog in series: Do you really need to get a new/newer automobile?

An elderly client is selling this home in the heart of Ardmore. Incredible price for medical student (near both hospitals), young family, single person.

Large, separate workshop in back yard.

Two of the defendants settled after the complaint was filed, discovery was answered (interrogatories, request for production of documents) and multiple depositions.

The basis of the case was this: Plaintiff was at a Mexican bar. He was standing outside in the smoking area of the bar, also being the sidewalk of the shopping center. Two thugs had just been kicked out of the bar by the bouncer for being rowdy and provoking. The bouncer escorted the thugs to the door. At that point, they walked past the plaintiff, walked back behind him, and without warning to plaintiff, the thugs began pummeling him from behind.

The landowner and bar settled earlier. The main issue with them was the questions of whether (1) this was foreseeable & (2) preventable. Armed with extensive investigations to identify the number of criminal activities & 911 calls that occurred at the shopping center & bar, we were able to show bar owner and land owner should have known activity such as the beating complained of was likely to occur and foreseeable. The big question was whether a proper security guard and/or properly trained bouncer could have prevented the two thugs from jumping the plaintiff.

While there was a settlement and payments by bar and landowner to plaintiff, this $408,880 judgment against the two thugs is unlikely to ever be collected.

According to state troopers,an SUV went off the shoulder of the roadway in a curve.  The driver pulled the SUV back onto the roadway, but it overturned and rolled several times before landing on its side.

The driver dies. The Four other teen passengers, were taken to the hospital.

Troopers suspect alcohol was involved, but they’re waiting for test results to determine if in fact it was.

Speed is also being considered a contributing factor.  Troopers said the SUV was traveling about 70 mph going into the curve.

The crash is still under investigation by the N.C. Highway Patrol.

LEGAL QUESTION: Who would have a potential claim for personal injuries due to this car wreck?

BASIS: The driver had a duty to drive properly. If she was underage drinking and/or speeding, then she breached her duty. That breach proximately caused the injuries to the passengers.

OTHER ISSUES: Contributory negligence? Did the passengers knowingly ride in the vehicle with someone who was drinking. If contributorily negligent, then their claims could be barred under present NC law. That would go to the jury for deliberation.

Today, the shroud of the Austin Healey made its last leg in its Odyssey to be united with its new (to it) car. It’s travelled from Ontario, Canada, was picked delivered to Wytheville Va by one Healey owner, then to Elkin, NC by another Healey Owner, then to Winston-Salem by me, and finally to Donald Ross’ shop in Zebulon. It had an Odyssey in a Honda… Odyssey. (Cue drums). Hopefully the car will be completed soon. Wife is tired of me sending checks to the mechanic.

Winston-Salem Bicycle & Pedestrian Program has a week of events to promote bicycling as an alternative to driving cars.

Tuesday, May 15, 2012: Cobblestone Farmers Market at Krankies. City’s bike and walk coordinator will have maps from 10am to 1pm

Mock Orange Bike will display gear for commuter biking. Kernersville YMCA will have info table from 7-9am

Wednesday, May 16: WFU Baptist Health “Bike to Work day”. Info table at Downtown YMCA 7-9am. Mock Orange will have display.

Thursday, May 17: Winston Lake Family YMCA to have info booth from 7-9am

Ride on and be safe.

Today is a cause for celebration. We just successfully completed three years in litigation in a file. The defendant on a couple of occasions appealed orders to the N.C. Court of Appeals. We got his appeals (yes, plural) dismissed. Last month we had our final motion to complete the case. The time has run for the opposing side to appeal. This case was an oddysey.

I can safely say the opposing party was a ‘vexatious litigator’. Most of this file are his motions & appeals.

Call Sanders Law Firm, PLLC (336) 724-4707 if you have litigation needs in Winston-Salem, King, or the surrounding counties.